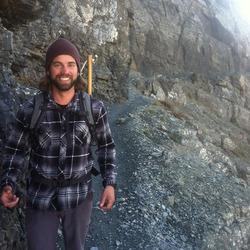 Martin spent most of his summers just over Schofield pass, in the old ghost town and mountains of Crystal. Growing up backpacking in the Maroon Bells and Elk Range, gave him a love for the outdoors. He continued his passion in 98' by moving to Boulder for climbing and a NOLS semester in the Wind River Range. He continued onto CMC in Steamboat Springs, to obtain his EMT and education while guiding backpacking and canoe trips in the Boundary Waters and Rocky Mountains. Jumping the pond to the Big Island in 2001, he found new passions; sailing, surfing and spearfishing. Martin made this a full time job sailing as a deckhand in the South Pacific. After refurbishing his own sailboat, he spent the next 5 years sailing the west coast of the US, Mexico, Central America, South America and Galapagos. He has logged over 20,000 nautical miles, holds a 50 ton captain's license and has worked on various yachts and sailboats in the islands of the South Pacific and Pacific Northwest. He enjoyed working with a wide variety of clientele from all over the world and providing them with the best experience possible. In 2009, Martin attended Le cordon Bleu and then went on to work in Spain, Switzerland, and India, absorbing as much food culture as possible. He brought it back to Colorado in 2012, opened a food truck and catering company in Fort Collins CO where he found two more passions, his wife, Chelsea, and black lab, Reba. They sold everything in 2014, moved to the other end of Schofield Pass and have settled in the mountains of Crested Butte.