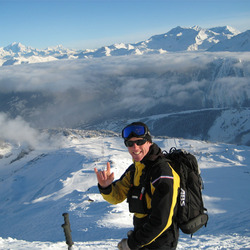 Tom moved to Colorado in 2000 after living in Missoula Montana for four years. He has been climbing his entire life which led him to a passion for living in the mountains skiing and ski mountaineering. He has been working as an Irwin cat guide since 2008, and for Crested Butte ski patrol since 2004. In 2009 he worked and lived in the French Alps for a season working as a patroller, and has developed a passion for skiing in Europe. He has spent four seasons in the Alaska range working for the National Park Service as a volunteer for Search and Rescue, and is aspiring to work on Denali as a climbing ranger. He is also a member of the Black Canyon of the Gunnison Search and rescue team, and an EMT-B.